The Parable of the Talents

By Dave Currier — 2 months ago

Let me start by saying this is probably my favorite parable in scripture. It just hits so close to home on many levels and I want to share with you how it has shaped my understanding of what being obedient means.

So what does this all mean? I’m sure there are layers upon layers buried in here, but for me, I understand this in its simplest terms. We are given something and we are required to turn that into more. If we do, more will be given to us. I’ve seen this play out in my own life, and I’m sure if you look back, you will have to. But rather than analyze what has been said here, let me instead tell you the story of how I was the guy with the 1 talent. That’s right. I took my talent, buried it in the sand, and gave it right back. If only I could take it back… To some extent, I’ve tried and I believe Yahuah has rewarded that behavior.

If you don’t know who Adam is, I suggest you stop here and do a quick YouTube search for “Parable of the Vineyard.” I found Adam in 2017 and he has been instrumental in my walk ever since. After I met Adam, I ended up building his website and managing a bunch of his internet related stuff. Every year, Adam’s ministry holds a nationwide baptism event. I had the honor of hosting a baptism location up here in Franklin, NH. The first year that I participated, we had a lot of people show up. We did something like 13 baptisms, and there were around 25 people including the families.

So there it is. Yahuah had given me 13 people. Of course some of them came from far and wide, so not all of them were destined to be a part of our flock. But most of the people that came, I’ve lost contact with. What a shame. Here I am praying for a Sabbath group, Yah sends me all these people and I didn’t once thing “maybe I should ask these people if they want to stay in touch.”

It wasn’t until next year’s baptism that I realized how much I’d screwed up. I read this parable probably 50 times or more each year, just reading through Matthew. And one day, it just hit me. I’m. That. Guy. Really. So, I did what any repentant heart would do and I called everyone from the first baptism, I emailed people, I just started reaching out to everyone Yah had ever thrown my way. I prayed, fervently, and told him that I didn’t realize what I was doing and that I would be grateful for another chance. Thankfully, he delivered. I now stay in touch regularly with most of the locals that came to the first baptism. And we’ve started a monthly Shabbat fellowship with the crew that came to our second baptism. And believe me, I will never let a single one of these people go.

Don’t be me. Learn from my mistakes and recognize that when the Father gives you something you’ve always wanted, you need to do more than just give him back what he gave you. You need to multiply it.

I’ve wanted sheep for as long as I can remember. Honestly, I’m not even really sure why. I don’t really eat lamb that much, and I’m not a farmer. But, if you read literally any part of the Bible, it’s likely you’re going to be confronted with some sort of farming metaphor. You really can’t escape it. And part of me wanted to know: What does it all mean? So like basically every faithful servant, we got a live lamb to celebrate the Passover. A friend of mine actually covered the cost and I drove 4 hours to pick up a lamb of suitable age. We didn’t have anywhere to keep him other than a horse stall in the barn, so that’s where he lived. 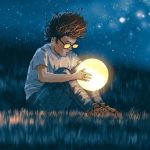 Dave started and runs the Torah Fellowships website, is the producer over at the Unexpected Cosmology, and is the webmaster for Adam Fink. He has been Torah Observant since September of 2017 and has been growing his knowledge and fellowship ever since.